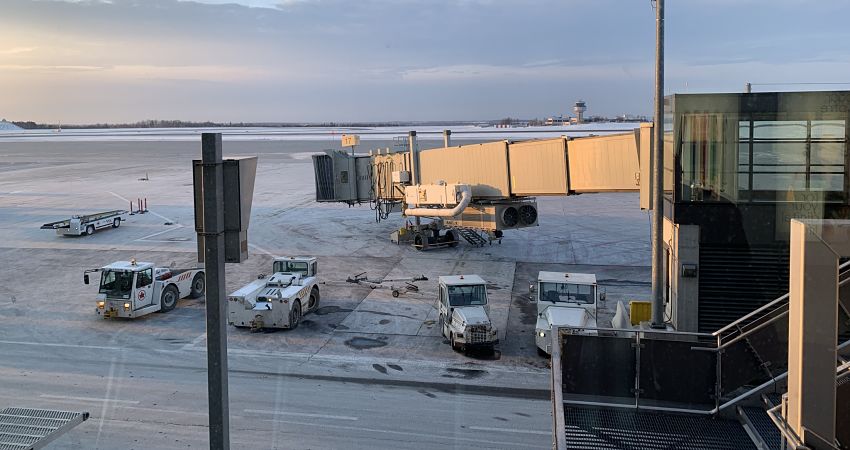 So I made it! I can’t believe that back in August, I was about 109 days out from boarding a plane and heading to Japan. Today, I’m just a couple hours away.

The flight to Toronto is a short trip (maybe an hour and fifteen minutes) but the bigger hurdle comes with the Toronto to Tokyo direct flight, that is approximately a 14-hour monster.

I really got lucky flying today as it’s a balmy -2 degrees Celsius in the National Capital Region and the sky is clear!

Cleared without any major hiccups. Not like that time I asked for the full body pat down in Alabama. I do not recommend telling the security agent that he has soft hands.

What am I bringing?

27 days in Japan? No problem, I’m just bringing a backpack. That said, it’s a pretty big backpack! The Osprey Porter 46 is certified to fit in most plane’s overhead compartments. It’s small enough to make a great travel pack but large enough that you won’t want to carry this thing around on your back all day. There isn’t a lot of back support but that’s the trade off for being so easily stashable in the overhead. The backpack straps also fold into the pack so you don’t have to worry about them catching on anything in the overhead or if you have to last minute planeside check it.

That’s why I also travel this little guy. The New Outlander collapsible day pack. At 20L it fits a good chunk of gear while being able to fold down if required. Travelling in the winter with bulkier clothes however means I’m not stashing it in my Porter bag, I need to use it now. In my case, I keep this with me at my seat on flights. I use it typically for medical supplies and the electronics I’ll need on the plane to keep myself occupied.  It’s a great pack and I got it in red to be more visible (in a world full of black bags, be red).

Preparing for a long haul flight?

So what do you do to prep for a long haul flight? You load up on podcasts, music and download some Netflix shows for offline viewing. Lucky for me, Shyla gave me some good suggestions for podcasts…the most timely, season two of a CBC documentary podcast called Uncover about, well, a plane bombing!

Uncover is an investigative podcast from CBC podcasts. Season 2 examines the unsolved bombing of a commercial passenger plane.

Thanks, Shyla! 😉 At least I have the sweet voice of Ian Hanomansing to keep me company on the flight.

Side note, I didn’t download anything this morning for offline play on Spotify… well Gord, I hope we can survive a 14ish hour flight together. That said, I’ll probably download some music when I land in Toronto. Any suggestions?

Anyways, I’ll update this post when I arrive in Toronto before I board the next flight AC1 (scheduled for 1:35 pm).

So I’m bringing Shyla a gift of dill pickle chips. Let’s play a little game called how long can I go before this bag explodes in my luggage? I’m taking bets…

I didn’t thank Melissa for driving me to the airport! I was promptly made aware of this and Tucci Solutions Ltd. is very apologetic for this mistake. Thank you Melissa!

Made it to Toronto now I’m on the plane to Tokyo… they are kicking me off my phone now. I was forced to check my bag in Ottawa because the plane was just too full! See you all In a few hours. Have a picture!

See you in Japan!

I am currently running on about 3 hours of sleep and writing this on a mobile phone, please excuse any grammatical errors featured in this post.

5 thoughts on “I’m leaving on a jet plane”