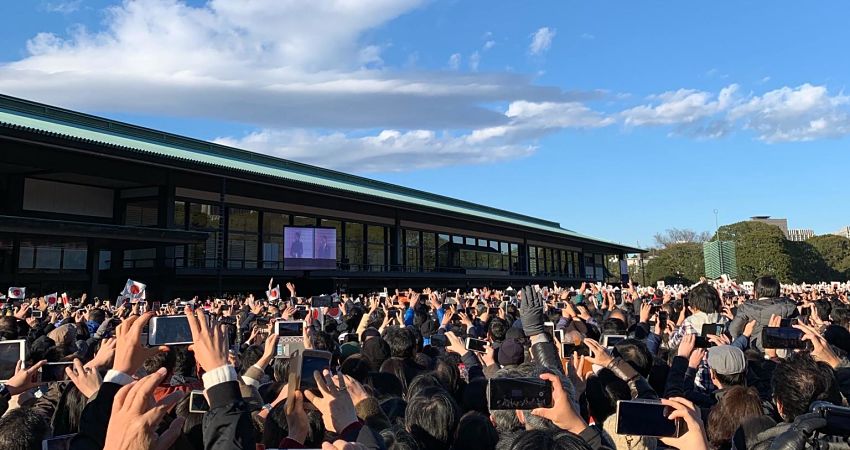 On January 2, 2019, Shyla and I got to visit the Imperial Palace in Tokyo to see Emperor Akihito’s final new year appearance. The Emperor’s New Year Greeting is when the current Emperor addresses the people and the people offer good wishes to the Emperor.

The Imperial Palace’s Inner Garden is not accessible to the general public, except in some special circumstances, such as the Emperor’s Birthday on December 23rd, or the Emperor’s New Year’s Greeting on January 2nd. Guided tours are also available, however, no buildings are entered on the tour. For that reason, getting inside the palace grounds was pretty exciting.

On January 2nd the Emperor made 5 public appearances and was accompanied by the Empress, their Imperial Highnesses the Crown Prince and Crown Princess, and other members of the Imperial Family.

Map of the Imperial Palace and Surrounding Area

Arrival at the palace was pretty exciting. Shyla, the expert navigator, was able to find the exit from the station amidst the countless other exits. We wanted to get to the second appearance at 11:00 am but we arrived at the palace around noon.

Once on the street, you only had to follow the crowds of people making their way toward the Imperial Palace. There were police officers directing traffic (both foot and automobile) at the intersection leading into the Imperial Palace. They were instructing people over a megaphone, but as someone who doesn’t speak Japanese, that wasn’t helpful.

On our way into the Imperial Palace, we saw droves of people coming out. We weren’t sure what to expect once we went inside.

A rare bag check in Japan

We were warned in advance that there would be a bag check, something I really had not seen in Japan prior to this outing. Bag checks were not a thing in Japan. It was a very odd experience coming from North America where bags are checked everywhere.

Shyla and I heeded the warnings and packed lightly. I only brought my wifi router and a battery pack and we had our bags opened and ready for inspection before getting to the security people checking them. The real fun came after the security check.

After security, we were moved into the area of the map that I’ve coloured green. This big open area was divided into several smaller lines, each with a separate number, ours being number 3. Don’t let the map fool you, these lineups were wide and LONG. Once in this area, we waited at least 2 hours, maybe even 3 before we started shuffling into Kyuden Plaza. We were too far away from the front but I believe the lineup even started along the Seimon Ironbridge. Once people started being allowed into Kyuden Plaza it was frustrating because there seems to be no order in how they were releasing lineups of people (I’m sure there was but it was not obvious to me). Although we had numbers, we weren’t being released in numerical order. Eventually, we started moving and we made our way into Kyuden Plaza.

2019 was the largest turnout since 1990, below I have included the past 7 years worth of data. You can see it was significantly higher this year, most likely due to it being the last year of Emperor Akihito’s rule before his abdication on April 30th of this year. This is the first time an Emperor of Japan has done this in over 200 years!

People were really pushy once we got inside Kyuden Plaza. At one point, a police officer had to shout at people that there was a child in the crowd in an attempt to get people to stop pushing.

Audio Taken from the Speech

I recorded this audio from my phone as we stood in Kyuden Plaza.

Leaving the Imperial Palace wasn’t nearly as painful as getting in, but it still took a fair amount of time. We left the Kyuden Plaza and exited through Sakashita Gate. While we started in the middle of a huge crowd as we got closer to the gate we looked behind us and noticed that most of the people behind us were gone! They must have exited through Kikyo-mon Gate, Ote-mon Gate, or Inui-mon Gate.

Overall, it was a truly incredible experience. To say that we were there is going to be something that we can talk about for the rest of our lives. Although it was busy and waiting in line for 3 hours, it was worth it.