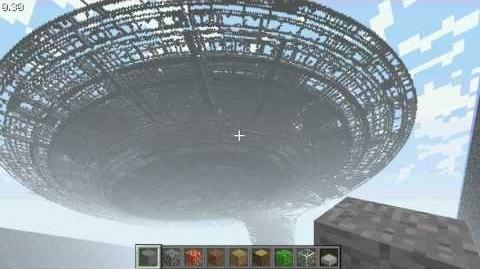 I remember one of the first times I saw what was possible with the power of Minecraft. I was on my computer and went to YouTube and searched very simply, Minecraft. I was hit with hundreds of results. People were using Minecraft for all sorts of mini projects, building houses, farms, mines, etc., but the one that really caught my eye was a full size scale frame of the Starship Enterprise from the extremely popular Star Trek franchise. I was completely blown away. The user was able to get a copy of the schematics online and build a replica scale model in the Minecraft virtual space. From this point on I knew that Minecraft had the potential to be absolutely valuable in giving people the ability to build, explore and learn. I have included the original YouTube video embedded below (warning the video does have a brief moment of foul language at 1:31 so be careful if you choose to watch this with the volume turned up or with children around).

Makerspace is a hot term in the library world right now. I just returned from the Ontario Library Association Super Conference this past week and saw that maker spaces were a popular focus of several presentations. Minecraft takes the very essence of makerspace and projects it into a virtual space which allows the community to take full advantage of the World Wide Web’s fluid 2.0 technology. This ability to modify, create, share and learn is why the Minecraft community is an extremely valuable source of learning and information.

Minecraft is a popular PC game and was recently ported to Xbox and Playstation in 2013. It has over 100 million downloads since its creation in 2009. This past year the franchise was purchased by Microsoft Software for an astounding $1.5 billion (Licence!, 2014).

For this research paper I will choose to explore one of the multiple community sites being used for sharing, collecting and presenting information about the popular Minecraft game.

Using Durrance and Fisher’s characteristics for online communities, this community has a great deal to offer for my research paper. Fisher and Durrance (2003) argue that there are 5 key criteria that information communities need to have in order to be effective.

This paper will be a good foundation for identifying gaming communities not only as a social medium but as a learning environment.