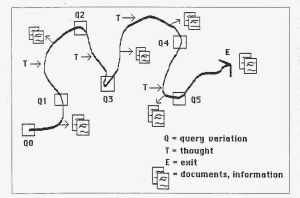 The three theories are:

Using these three theories I will examine gaming communities’ search behavior, how users rate material and how they identify useful and relevant information. Gaming is an interactive practice. Whether you play alone (also known as solo) or if you play within a larger community (multiplayer) you are interacting with either an artificial environment or other players. It is these interactions that make gaming an interesting community for information professionals to study. In a very general overview the theories say the following: Bates (1989) argues that the research process is not linear but in fact is an evolving process from beginning to end. It requires that information returned through queries is read and comprehended. This leads the user to modify the query to include additional information to refine their search and locate additional information. Savolainen (2009) argues that everyday life information seeking is extremely important to users today. People join communities in the hope that they will come across useful information just from being an active member of the community. Burnett (2000) deals directly with the important aspects of information communities in virtual space. Each user has specific roles and ways that they acquire information within these virtual spaces.

I recently had the chance to interview a history professor who uses gaming as a tool for their courses at the post-secondary level. Their most recent course used Minecraft to recreate historical places and events.

On gaming in (post-secondary) education:

This past year was the second time this professor used gaming in their course. The first time they had students theoretically create a game. One group actually created a working prototype which put users in the trenches of a World War I through the perspective of a medic. The professor ran into a lot of red tape when it came to trying new things. There was an entire procedure in place which required a business model to be drawn up, cost recovery, etc. Ultimately the hoops that needed to be jumped through were too big to tackle. The professor turned to the library to see if there was anything that could be done instead. Minecraft was a relatively cheap alternative that allowed students to interact in a way that this professor wanted.

The professor gave students free reign over the project. They were able to search the web for their own resources but the professor also created their own tutorial guide for the students to use and reference. User generated content is going to be a big focus of this paper. Henry Jenkins is a researcher who writes extensively about user generated content and participatory culture; I will be drawing on some aspects of Jenkins work toward the later part of my research paper.

On the value of Minecraft in teaching:

The professor wanted to engage with their students in a new way. They were not happy with the way essays were being used to grade student learning. Students write an essay, hand it in and receive their grade. This is a very closed method of learning. Students are writing essays and spending so much time researching only to have one person read the paper. By having students collaborate in an open world such as Minecraft they were creating and sharing content with their classmates. Instead of having the criteria given to them (for example a 4000 word paper on Ancient Greece) students really set the standard of how much they want to do with the project. This idea is discussed by psychologist Jacques Lacan who argues that the gaze is the anxious state that is reached knowing that you are being monitored (Felluga, 2011). The idea is that they are monitored by their peers and this idea of being monitored sets a higher standard for themselves. While sitting in the small coffee shop where I conducted the interview the professor drew a picture on their note pad. I have included the pictures below because I immediately thought their description was similar to Bates’ (1989) berrypicking theory. Although describing different things, interestingly enough they were similar in their foundations. The professor produced two sketches while we spoke. The first is an example where students are given a set of criteria that they use to complete an assignment. They do their work, research and submit their assignments within the criteria (or constraints) set out by the evaluator. There is very little if any peer input or collaboration.

The second sketch they drew was of the method they wanted to use in their classroom. The professor wanted the students to really control the criteria. The intent was that the gaze of the other students would shape the criteria for the assignment. The self monitoring of students would encourage the students to try new things and push the boundaries of the assignment. This is shown clearly in the diagram below.

I think this view the professor sets out for their students is one that very much resembles the berrypicking theory that Bates describes. It removes the rigorous boundaries of searching for information and creates a more natural approach. I have included a more thorough explanation of Bates’ berrypicking theory since I feel it ties in with the overall shift of attitude toward information seeking and towards learning in general. Bates (1989) argues that this model (made famous particularly by S.E. Robertson, which is shown below) has been the one in use in information sciences for over 25 years. However, with the advancement of information retrieval systems, Bates argues that there are increasing flaws in this model. She expands on this model by arguing that the search process is not as simple as the model below suggests and this model will actually limit us when developing new information retrieval systems.

Instead, Bates states searching occurs in a more fluid way. The image below shows how Bates believes information seeking behavior works. In her theory, the user conducts a query and receives information back. From there, the user absorbs and critically thinks about the material they received which then gives them new perspective on what they need from the information seeking process. The user conducts a new query, receives the information, critically examines it and conducts a new query continuing this process until completed.

Observations on Minecraft as a teaching tool:

The professor spoke about some of the ideas students came up with after the project was completed. One of the students wrote a paper based on the gaming experience that tied in the idea of traditional gaming vs open world sandbox gaming to slavery throughout history. Another student tried to recreate the Halifax explosion using triggers within the world. When a user logged into the world a countdown to the ship’s explosion began, which wiped out the harbour. Another student took a different approach and used a famous painting as a backdrop for the recreation of their historical period. Not all projects were of the same caliber but even those where students admitted some failure, learning still occurred. This is one of the fundamental ideas that educational makerspaces are built upon. Failure within educational makerspaces must be tolerable. Big ideas are built upon the smaller failures that occur (Kurti, R., et al. 2014).

On the potential of gaming in (post-secondary) education:

The professor sees games as a new tool to write history. The tools need to be smart and not just centered around flashy graphics. They noted Assassin’s Creed as one example when graphics took precedence over historical accuracy.